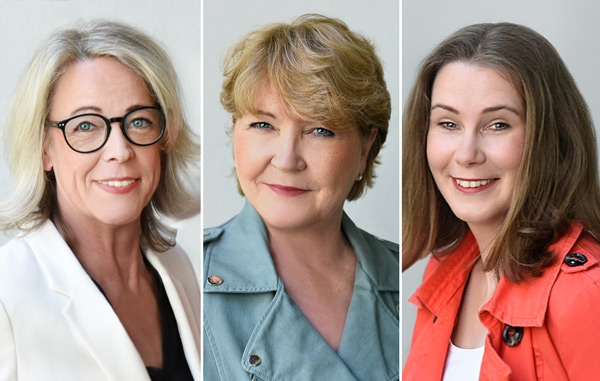 From the headquarters of her first media office in Munich, journalist and video producer Nicola Demmin-Siegel, for many years producednumerous TV documentaries, image and advertising films throughout Europe. Since relocating to Berlin in 2003, the SMB team Berlin has successfully represented actors, professional models and new faces and placed them with German and international commercial production companies and photographers.
Since March 2009, the well-established SMB team has also been involved in the agency Vamos! Actors Berlin.
Nicola Demmin-Siegel has specialized in representing actors of many different nationalities. SMB Siegel-Models-Berlin has successfully casted movie actors for international television and film production companies.

Timea Csontos was born in Hungary, is also a journalist and has been part of the team since the beginning – booking and vice president.
Lilly Kufner has worked as a production coordinator for television and is very familiar in many areas of the film business – booking and management.

This website uses cookies to improve your experience while you navigate through the website. Out of these cookies, the cookies that are categorized as necessary are stored on your browser as they are essential for the working of basic functionalities of the website. We also use third-party cookies that help us analyze and understand how you use this website. These cookies will be stored in your browser only with your consent. You also have the option to opt-out of these cookies. But opting out of some of these cookies may have an effect on your browsing experience.
Necessary Always Enabled
Necessary cookies are absolutely essential for the website to function properly. This category only includes cookies that ensures basic functionalities and security features of the website. These cookies do not store any personal information.
Non-necessary
Any cookies that may not be particularly necessary for the website to function and is used specifically to collect user personal data via analytics, ads, other embedded contents are termed as non-necessary cookies. It is mandatory to procure user consent prior to running these cookies on your website.
SAVE & ACCEPT